Perfect Gift for that Special Man in Your Life

My husband celebrates his birthday in a couple of months. I usually forget to buy him anything until the last minute; I want this year to be different, so I'M PLANNING AHEAD. I've been researching online, looking for a quality tool to add to his collection. He's set up a small shop in the garage, and I'd like to find something that he doesn't already own. 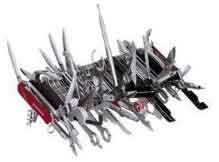 I discovered the Wenger 16999 Giant Swiss Army Knife, which comes highly recommended by commenters on Amazon.

You've really got to read some of the reviews. One of my favorites comes from a young woman named Nancy, who gives this product 4 stars and writes:


I received this as a graduation present two weeks ago, and three days ago I was carrying it around downtown, trying to figure out what to do with it, when I was pulled into a dark ally and had a gun pointed at my head. Reacting on instinct, I swung whatever was in my hand at the attacker. That turned out to save my life. The first blow, with the back side of the knife, not only knocked the gun out of his hand but opened up nearly 30 of the attachments. My backswing turned out to be far more vicious. The police are still in awe that I managed to stab someone with a flashlight, screwdriver bit adapter, tweezers, 10mm Hex wrench, can opener, cigar cutter, and three different knives in one blow . . . Thanks, 16999 Swiss Army Knife!


Although the majority of reviews were glowing, a couple made me stop and think about whether or not this item would make a good birthday present. Kibbles awarded it only one star and stated:


It never does anything right! I tried to file my nails and I ended up putting a corkscrew through my hand. I put it in my pocket and it circumcised me. I tried to open a can of beans and it chiseled through the can. I tried tweezing my stubble and it clamped on my tongue . . .

Ha, ha, ha. It is a multi-purposed tool.

I'm putting this in my Amazon cart just in case. You know, for those people who have everything and are impossible to buy for. I think it might be best packages WITH the reviews ;)

Yeah, just saw the price. Think I'll just wrap up a picture and the review and a note that says, "Aren't you glad I didn't buy you this?"