My 11-year-old daughter started taking ice skating lessons two years ago, and has performed with her class in Christmas shows. After this past December, she decided she would like to try competing. What? Gulp. Despite being a lifelong Alaskan, I've only ever skated a couple times on frozen ponds. All I remember is that my feet hurt. I don't know the foggiest about what's involved in figure skating competitions. This world of ice arenas and sparkly costumes and stone-faced judges sitting all in a row is new and mysterious and scary.

My rear-end fell asleep on the cold, hard bleachers. My stomach hurt as I watched my little girl skate out to the middle of the rink to begin her program. She broke into a big smile as she began performing to a song from one of her favorite musicals, Hairspray. 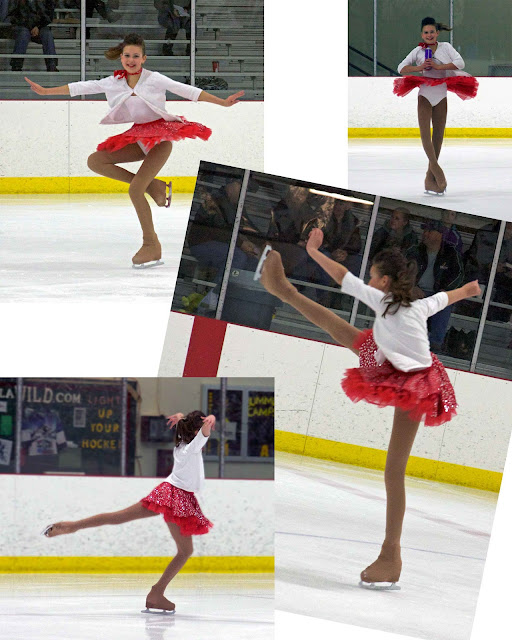 She won 2nd place.
Not bad for her first time out.

She's begging us to let her enter a second competition to be held in April. Her teacher wants her to compete on the spiral team, which evidently is different than the spin team (?) A spiral by definition is a circular movement, isn't it? Don't ask me about skating lingo. I'm just the nervous mom with a frozen butt sitting on the sidelines trying not to throw up.

Congratulations! She looks like she's having a wonderful time!

That's awesome. I hope that my boys find something to be involved in that they love this much.

That is so great....have always loved watching skating so much and would love to watch her some day!! Aunt Janny

Sports keep teenagers away... I think it is great and she looks happy on the ice!!!

This is just fabulous! Bravo for her in doing so well.

Ha, ha. Good luck to your daughter and to you frozen butt.

She looks so happy out there on the ice. And second place?? That's fantastic!

SHE HAS LEGS of a GODDESS!

Wow, she did great!