A Foot of Snow and a Ton of Turkey

We woke up Thanksgiving morning to a winter wonderland. The snow continued to fall for most of the day, leaving us with 12" of perfect powder for sledding and skiing. The kids had a blast playing outside while I prepared the big meal.

My family isn't known for their love of exotic foods—at each holiday meal, my husband says grace and then regales us with his horror story about once having to eat a fancy cold oyster stuffing at someone's dinner party—so we stick with traditional fare for our Thanksgiving feast. 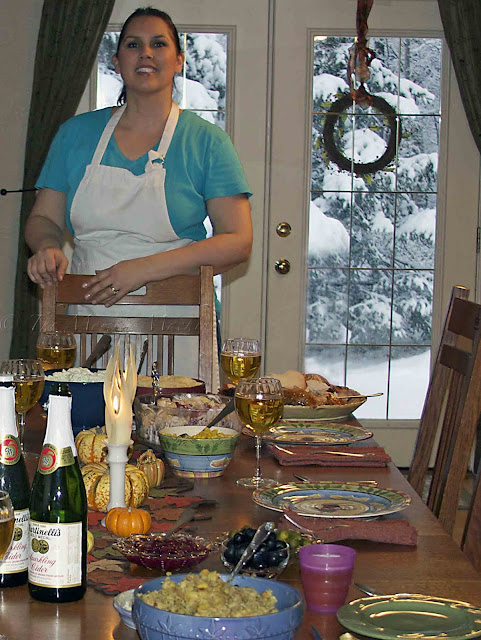 Are We Ready for Tomorrow?

Just in time for Thanksgiving, the skies decided to open up and throw down some rain to freeze across the ground in sheets of glare ice. I thought I lived in the wilds of Alaska, where all the women wear Crocs, all the men are hairy, and all the children run around without coats, but I guess I'm residing in a delicate suburb where the schools CLOSE DOWN FOR TWO DAYS because of icy roads. TWO DAYS. So I'm trying to prepare the house for guests, bake a pumpkin pie or two, and stay sane with four children unexpectedly home from school, screaming for hot chocolate and demanding the password to the computer so they can watch Disney shows online.

If you ask me, the teachers aren't banning children from skating in and out of traffic to school; they just want a 6-day weekend this holiday. Well played, teachers. Well played.

Whether you're in the icy rain or in the sunshine this November, I hope your day tomorrow is peaceful and blessed. Happy Thanksgiving, friends.


Exactly one year ago:
Moose on Deck


Exactly two years ago:
Stocking a Pantry for 6–12 Months, Part 2

During summer, I fight vainly to keep my girls' feet in socks and shoes. When winter arrives, I continue my useless nagging to wear socks and . . . warm boots, please. Also, a hat would be nice. Where are your mittens? 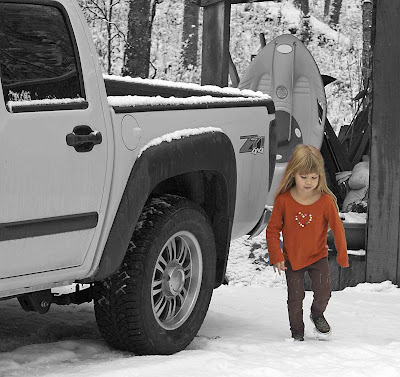 Coats are for sissies, Mom. 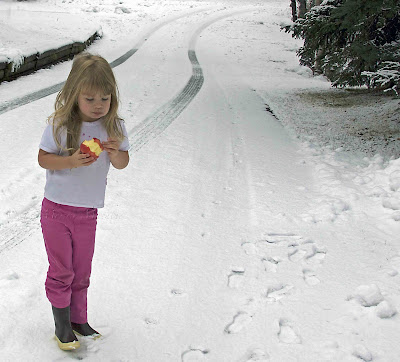 Alaskan kids eat their snacks outside. In short sleeves.

It's hard to believe that less than a year ago, my 10-year-old daughter could barely skate. She begged and pleaded for lessons, and we finally gave in. We figured she'd learn the basics and go her merry way, but Little Miss Persistence is determined to become a proper figure skater.

Exactly one year ago:
Grateful

Exactly two years ago:
Does This Make Me an Air Hockey Mom?

Email ThisBlogThis!Share to TwitterShare to FacebookShare to Pinterest
Labels: videos

I've been offline for a week tending to sick children, a rundown husband, and my own grumpy self. We're all feeling much better this morning, and I'm hoping we can return to a more normal schedule. I forget how much I depend on routine and structure in my life until order is removed for a few days.

I'm so discombobulated that I don't even know what to blog about. Until I can gather my wits about me, here is a profound and thought-provoking metaphor for you: 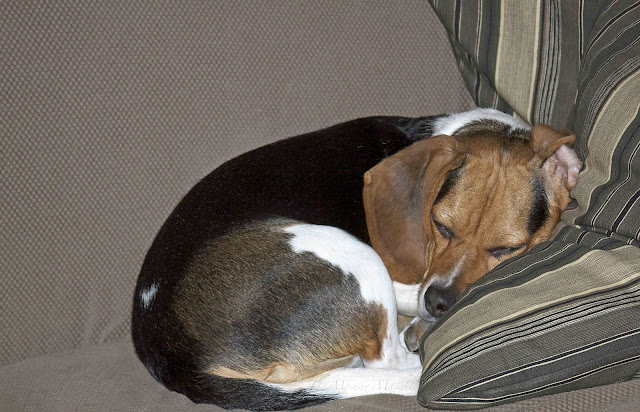 Life is a sandwich-stealing beagle, sleeping on the hand-sewn pillows
that you just made for the sofa.


Exactly one year ago:
Cold and Flu Season 2009

Exactly two years ago:
Stocking a Pantry for 6–12 Months

I like to post pictures, but I'll refrain today, since the only appropriate photograph would be a crumpled-up tissue. We've got the yuk running through the family. Fortunately, it's not a stomach virus—just an achy, cough-y, run-downy sort of cold/respiratory flu.

Whenever I'm sick, I tend to worry a lot. My mind latches onto weird little strands of thought and obsesses over what should be insignificant events. For example, the other day I commented on someone else's blog that I hated my dog, she was so stupid, because she had jumped up when I wasn't looking and snagged a turkey and cheese sandwich off the counter. She hid behind the sofa AND ATE THE ENTIRE THING. Now I can't stop worrying that my dog will find out about what I said in a fit of pique about her and that people might think I actually hate my dog.

I'm so sorry, Daisy. I didn't mean it. I love you and your velvet ears, and you are actually a clever little beagle. I didn't appreciate your stealing the girls' lunch before I had a chance to pack it, but props to you for executing your sneaky streak in a room full of people who didn't even see you commit the crime. Who knew beagles could jump silently? That they could even jump at all?

I think I just came up with a great name for a polka band: SNEAKY STREAK.


Exactly one year ago:
Braces Off

Room with a View

I love looking out at the snowy trees and catching a glimpse of the sunset beyond. It's snug and cozy inside the warm house, but I don't feel stifled. 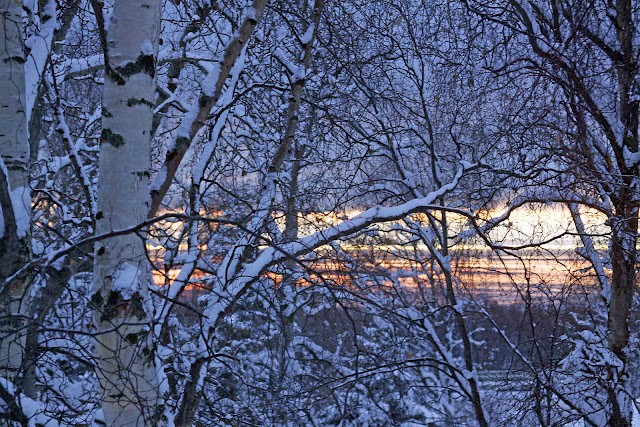 There's a great big world out there.

Mooned by a Moose

There I am, minding my own business, wandering about the house looking for some leftover Halloween candy, when I decide to open the curtains and let in some light. 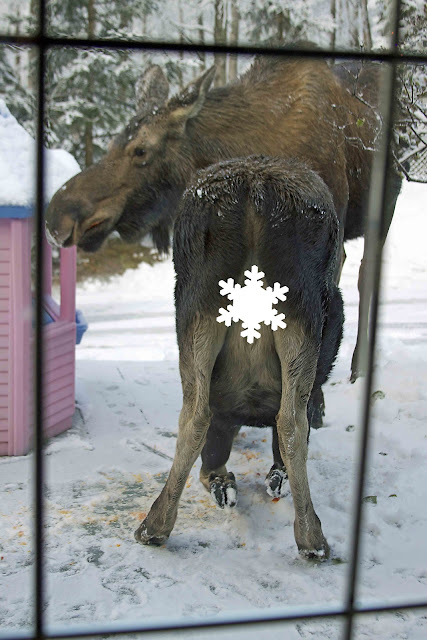 And good day to YOU, sir. Or is it madam?
On second thought, forget I asked. 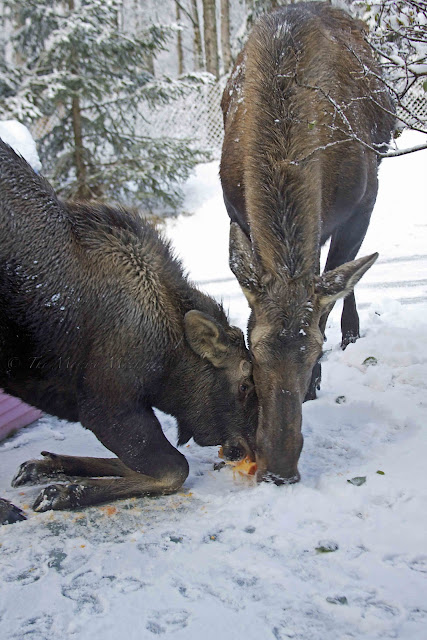 From a less graphic angle, you can see that a mother moose and her calf are lounging on our deck, eating something . . . orange? What the . . . ? 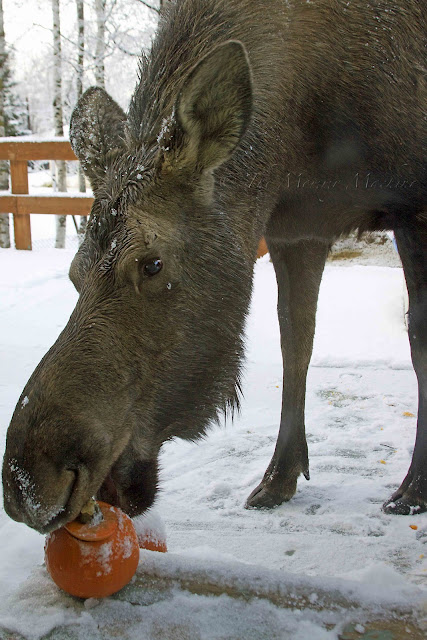 Please. Help yourself.
We spent hours carving pumpkins
just so you could enjoy a mid-morning snack.

I've heard that age two is when most children exhibit their unruliest behavior, but all of my daughters went through their toughest stage at age three. I experienced a particularly difficult patch with my youngest girl.

I've always lovingly referred to her as "independent," but I've come to realize that she is by far the most strong-willed of my four daughters. My experience in raising children amounts to a hill of beans when dealing with my youngest. What in the world was the point of raising my older kids if nothing I learned works with my baby? My usual arsenal of weapons, such as the stern look and the mean teacher's voice, are useless. Forget about time-outs or counting to one two THREE! She is so strong-willed that I made the mistake of Googling "oppositional," which led to my discovering "oppositional defiance disorder," which resulted in the subsequent taking to my bed in a state of despair.

My daughter is definitely oppositional, but after much reading about ODD, I am convinced that she does not suffer from that particular disorder. She's a contrary little thing, to be sure, but she's not hostile or violent or mean. She likes to be the boss, to control the situation, to make sure things are done her way or the highway, but she doesn't throw tantrums, freak out (too much) at her sisters, or deliberately hurt our pets. I'm not sure exactly where she gets her independent streak, but I'm starting to have my suspicions. The other day, I caught myself snatching something out of my husband's hands while snapping, "I can do it myself!"

I realized that I am oppositional. Er, I mean strong-willed. Or is it independent? Whatever it is, I am it. My daughter seems to have inherited that particular trait from me. On one hand, I am very distressed about this revelation; on the other, I am relieved. When I see her pitching a fit, I am pierced through the heart at how childish my own argumentative nature must seem. At the same time, I now have better insight into her frustration and irritability when others try to tell her how to do things or, Heaven forbid, refuse her demands to let her do them by herself!

I don't know if she will learn from the mistakes I've made over the years because of my oppositional independent ways—that would involve actually listening to and valuing what her old fogey mother has to say, and that's not likely to happen until she's a grown adult with a strong-willed child of her own—but at least I know how to start praying for her. And myself. Patience, unconditional love, wisdom, and humility. Oh, and patience.


Exactly one year ago:
Touch the Drapes and You're Dead

Exactly two years ago:
Two Kims for the Price of One

Fall is officially over. Well, not officially, I guess, since the first day of winter doesn't occur until December. For all intents and purposes, though, autumn is over and done with in Alaska. The first snow of the year fell during the night, and we woke up to a winter wonderland. 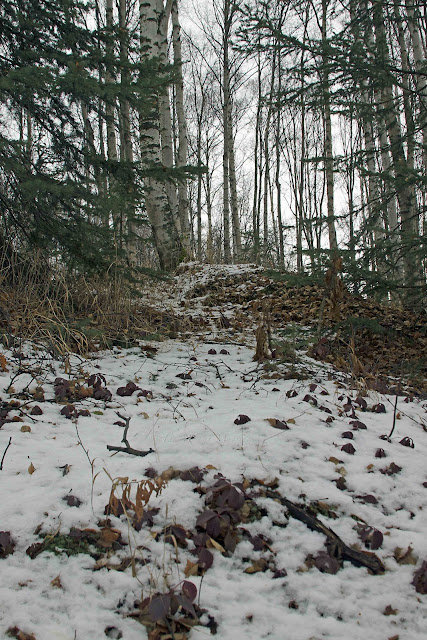 Perhaps wonderland is too strong a word.


Each morning, my twin daughters act like it's a big surprise when I call them over to get their hair brushed. Their eyes grow large and round in bewilderment, and they begin yelling indignantly.

"I don't WANT my hair brushed!" one screams into the cruel universe. "You're a MEAN mommy!" the other hisses at me. "NOOOOOOO!!!!" they both shriek, and off they run to hide behind the recliner in the family room. EVERY SINGLE MORNING.

Normally, this behavior annoys me. After getting their hair combed daily for the past 4 years, they continue to express shock and horror when I walk out of the bathroom with a hair brush and stack of rubber bands in my hand. Today, however, as I looked through the window at the snow that I know good and well falls out of the sky each and every year around this same time, I finally understood my girls' complaining.

It's a matter of principle.


Exactly one year ago:
Oops-a-Daisy

Exactly two years ago:
The More Things Change, the More They Stay the Same

The Bat and the Butterfly

The twins have been insisting for a good month or more that they wanted to dress up for Halloween as a beautiful, ethereal, gossamer-winged butterfly and a bat. Yes, a bat. A black, creepy BAT. 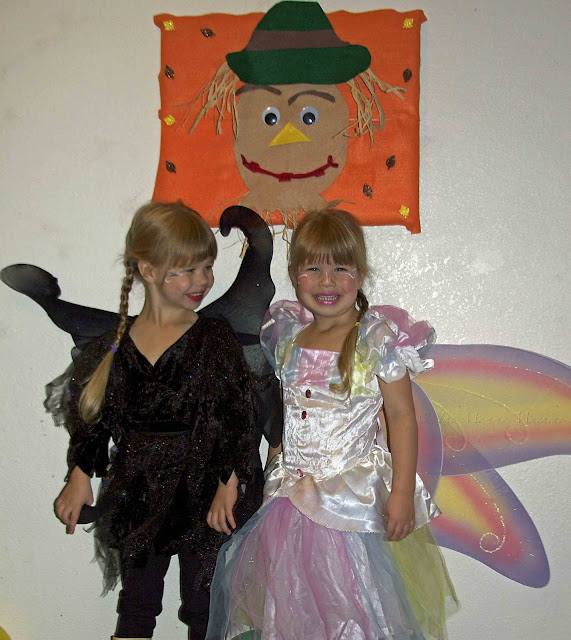 I vant to eat your candy.

Email ThisBlogThis!Share to TwitterShare to FacebookShare to Pinterest
Labels: twins
Newer Posts Older Posts Home
Subscribe to: Posts (Atom)
" . . . look at this world with a happy eye but from a sober perspective."
—W.H. Auden