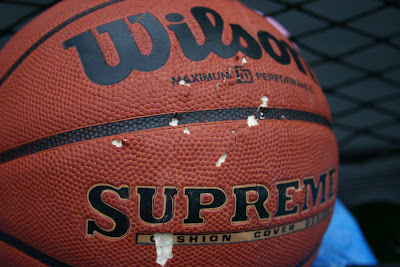 What is this? you might ask. Why, a basketball, of course. And what are all those scratches in the leather? Why, the claw marks of a bear, of course. A BEAR?? Yes, a bear . . .
Last week, the neighbor kids came running up to me all breathless and wide-eyed to tell me how their daddy, who was getting ready for work very early in the morning, heard a POP! from outside. He looked out his window to see not one, not two, but three black bears in the yard. The POP! came from the buoy swing that one of the bears had just bitten.
I was not happy to hear the words "three" and "bears" in the same sentence, because that can only mean one thing. Bears don't travel in packs. We have a mama bear and two cubs. Black bears are the least aggressive of bears, usually nothing to worry about . . . they're more scared of you . . . that sort of thing. But you don't have to be an Alaskan to know that a mother bear is to be avoided at all costs.
The neighborhood kids went on to explain that not only had the bears ruined their buoy swing, but they'd gotten into their trash and dragged it all over their yard. We don't keep our trash outside, so I wasn't worried. But then the kids ran into our backyard to discover that not only had the bears popped our big beach ball and one of the twin's little balls, but they had gotten into a garbage can that we keep next to the shed. And by "gotten into" I mean strewn litter throughout the woods along the back edge of our yard.
I had completely forgotten about that can. Anyone with children knows how quickly trash collects inside a minivan, so we keep a large garbage can near where we park, for the kids to deposit all their litter and junk from the vehicles. The can is sturdy, with a heavy-duty lid, and is hidden behind some bushes: 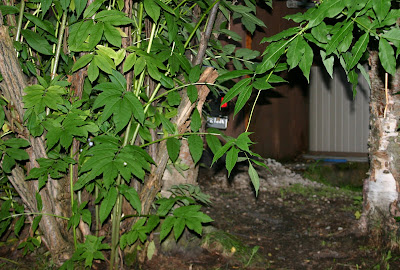 You'd think a bear would not be interested in a bunch of papers and the moldy grapes my kids drop on the floor of the van, but I guess that trash can will now have to go inside the shed. I do not want to attract bears with stale animal crackers and candy wrappers.
Because we live in the woods off a little unpaved road, we are the first trash pickup of the day. The garbage collectors travel first to the outskirts of civilization and then work their way inward, so they end the day close to home. I'm thankful that we are even on the route, because there are many other services we do without . . . like city water . . . and cable TV!
Now it's quite a process to transport all of our trash down the hill to where the garbage truck rumbles by at o' dark-thirty in the morning, but we're dragging our sorry heinies out of bed at the crack of dawn every Garbage Day to haul down to the road the significant amount of garbage that our family of six produces in a week. That way, it doesn't sit there through the night offering up a smorgasbord for the bears, who would then leave an unholy mess for us to clean up after they're through eating.
Sigh.
Dinner last night: angel hair alfredo
Posted by Kim

Holy cow!! Very scary stuff! I can't even imagine the mess those bears left!! Hopefully the mama bear and her cubs won't be back.

My mini-van is full of garbage from the kids but the thought of having them dump it all out as they get out of the mini-van into a garbage beside the van never occurred to me! Great idea!

It's a never ending battle to keep the inside of my van clean--not even clean, just NOT DISGUSTING.

A first-time mom I know informed me that her kids will not be allowed to eat or drink in her car EVER. I'll have to check back with her in a couple of years and see how that's workin' out for her . . .

LOL about the comment from the 1st time mom. If I had a nickel for every thing I do now that I said I would never let my kids do, I'd have enough college tuition for all 4 of them, plus money to buy a yacht and sail around the world!