The Nursery BEFORE and AFTER 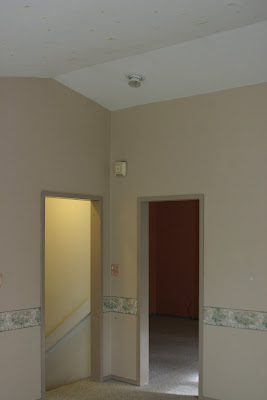 The room has a soaring ceiling and large windows across two walls so it feels very open and airy. Because its original color (shown here) was a nice neutral, I actually would have kept the taupe walls and matching draperies had we decided on another purpose for the room. But a taupe nursery simply won't do, so . . .
Step One: Colors 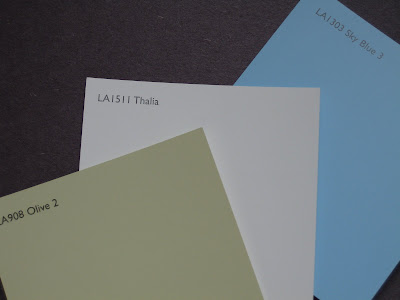 Laura Ashley Olive 2 will be the main color, with Thalia the accent color. Sky Blue 3 will be used for the ceiling as I attempt to create the feeling of open sky. I'm going with furniture in a natural finish and a decor that will be mostly white with blue gingham accents.
Step Two: Carpet
This speckled Berber had to go . . . the rough texture and lack of padding was too uncomfortable on bare feet. 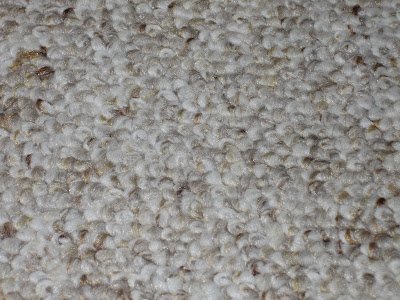 While perhaps appropriate for a home office or family room, this flooring would not do for our babies to crawl around on. We wanted clean, new, soft carpeting. As we ripped this old stuff out, we were shocked to find that there was indeed some padding underneath.
We replaced it with premium padding and a lovely plush carpet. Its softness should help with sound cushioning as well as comfort. 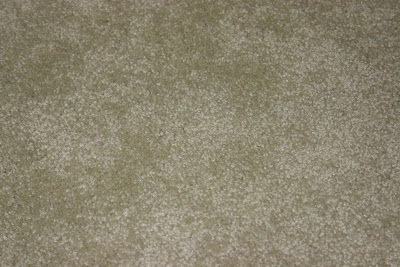 What color is "April Rain," you might ask. Good question. A sort of green. I went monochromatic and matched the wall color, but I refuse to describe our new carpeting as "olive."
Step Three: Doors
Since the nursery is adjacent to the master bedroom, we needed to fix the door situation for privacy, safety, and aesthetic reasons. We replaced the original sliding pocket door with these beautiful french doors (ten-paned fir we stained in a natural finish with two coats of varnish). 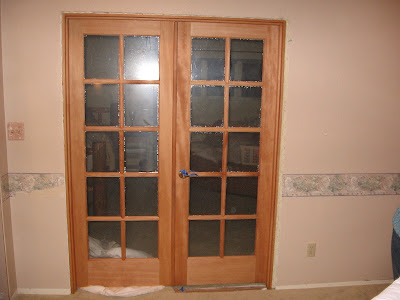 They allow lots of light through to our room and will make for a lovely transition to the master suite once the girls move out. Until then, these doors protect our room from mischievous toddlers.
Door number two was installed at the top of the stairs. Originally there was no door at all. A baby gate was okay for awhile, but now that the girls are climbing it is way too dangerous. This new door also provides soundproofing, especially in the early morning when the rest of the household arises and the twins are still sleeping. 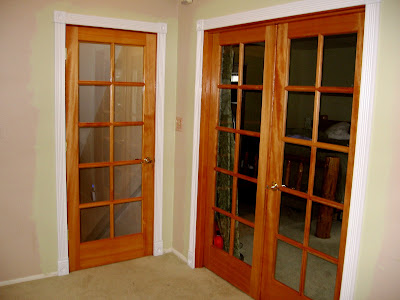 You'll notice the white trim around the doors, which looks a little funky in this shot, but will look better once the baseboard trim is on and the walls are painted.
Step Four: Ceiling
The worst part of prepping the ceiling was scraping off the hundreds of glow-in-the-dark stars and planets that were evidently Gorilla Glued on. I gave myself a nice case of carpal tunnel. I applied two coats of Laura Ashley Sky Blue 3. 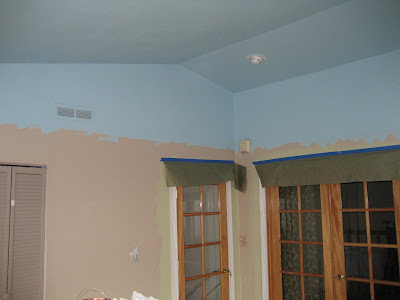 The odd angles of the ceiling required bringing the "sky" down onto three walls. (You'll see how it works when we put up the moulding.)
Next I used Laura Ashley Thalia mixed with glaze to create clouds. I worked freehand with a textured roller to apply the initial paint and a dry brush to manipulate it until I got the shape and "fluffiness" that I wanted. 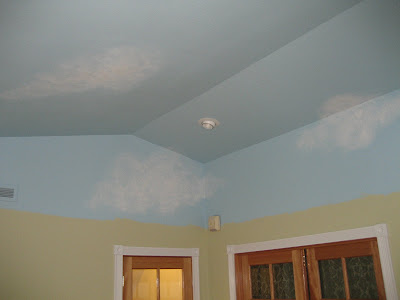 The clouds look a lot better when you see them in person. My older girls aren't impressed because they think the clouds should look cartoon-y. These look decently realistic, though, and I'm happy with them.
Step Five: Walls
The walls received two coats of Laura Ashley Olive 2. Olive sounds gross, I know, but this color is actually a beautiful neutral that holds up well as the light changes over the course of the day.
What doesn't hold up as well is my temper when I find THIS all over my freshly-painted wall. 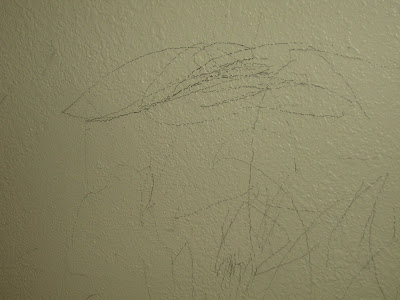 Hard to tell in that shot, but I'm talking a lot of scribbling. Here, let me pull back just a little further . . . 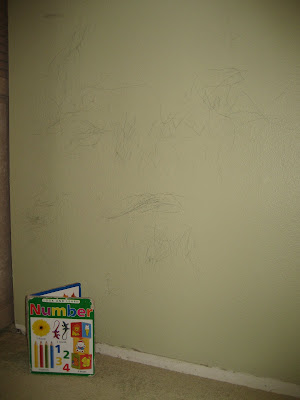 Now that's an insane amount of scribbling!! And it wasn't even the work of both twins. Just ONE naughty little girl, who looked up at her mommy and said, "UH-oh."
I had been fretting for months about how I was going to paint this room, what with the weird angles and rising ceiling. Then I stayed in a room at Land's End Resort, which had crown moulding running around the room a good foot from the ceiling, and I realized that something similar on the nursery walls would fix my dilemma.

I think the white moulding around the top of the room helps pull the nursery together.
We also installed white baseboard trim, which looks great: 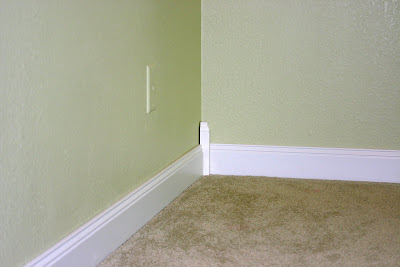 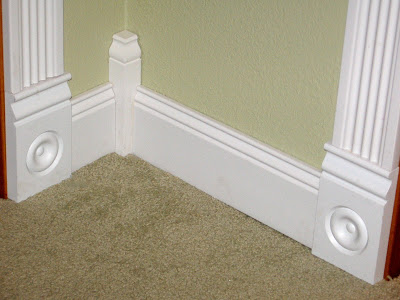 Seven: Decor
We took an old bookcase and painted it white. 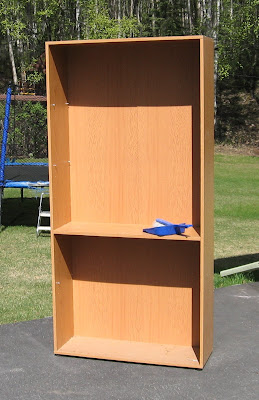 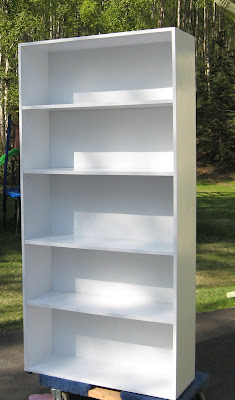 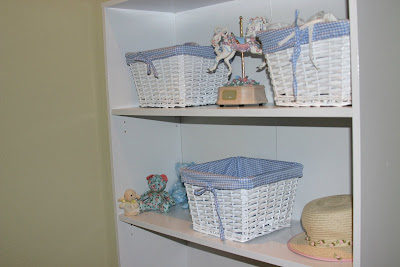 You can see how I use a lot of white wicker baskets with blue gingham. This look is repeated with white eyelet lace bedding and blue gingham sheets for the crib mattresses and diaper changing pad.
I painted the valance boxes over the windows white, and hung simple draperies that I made from white linen, which I got on sale for only $3.70/ yard. I thought that was a pretty good deal! I then put up cute gingham letters that spell out the girls' names, with little blue bow accents. 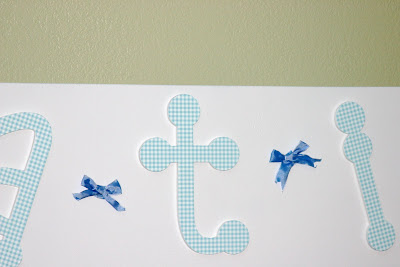 I'm really pleased with the look and feel of the nursery. What do you think?
BEFORE 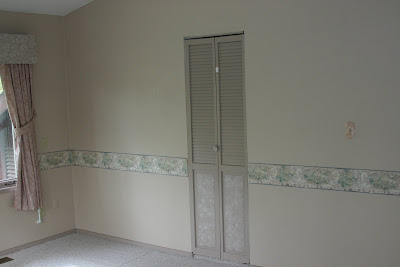 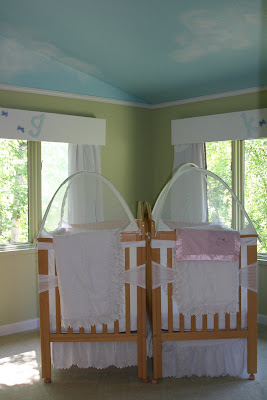 Nice work Kim,
That nursery looks a whole lot better in the after pics. Did you get your husband to help you with that or did you do it all yourself?
hee, hee.