I'm trying not to get too excited, but look at the date! I am now going to tell you something that is hard to believe . . . I have seen just 6 mosquitoes. And it's June already! I kid you not. Could it be that our skeetervac is working?! 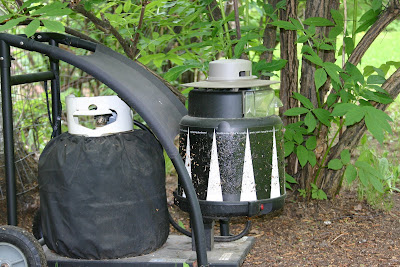 This is only our second summer in this house, but compared to last summer . . . what a difference. Last year, it was Mosquito Headquarters in our backyard. We moved to a house that is surrounded by trees, so I knew bugs would be inevitable, but I was unprepared for the swarming onslaught of mosquitoes the size of small birds attacking me without mercy as I tried to put in my garden.
The kids learned real quick to douse themselves with bug dope before stepping outside, and they smelled like they worked in a mosquito repellent factory for most of the summer. Every evening required a bug-slapping rampage throughout the house, trying to kill as many as we could before laying down in our beds and offering up our comatose flesh for the bloodsucking monsters.
Aware that we were probably tilting at windmills, we my husband set out to thwart the evil pests. He started by attaching bug screens on several windows throughout the house. This allowed us to breathe fresh air again without inviting a million mosquitoes indoors.
Then, dripping in Deet, the Mighty Mosquito Warrior turned his attention on the yard. Since standing water provides breeding grounds for mosquitoes, he got rid of all the stuff stacked behind a shed that had been left by the former owners—tires, 50-gallon drum, etc. Next he put rain gutters on the house and buried the drainpipe; rain water no longer puddles around the house but is directed out towards and absorbed into my rock garden. He also did a ton of clearing around the house, getting rid of dead trees and underbrush.
And his final desperate gesture . . . he purchased a skeetervac. God bless the skeetervac. He started running it at the first of May. And all I've seen are six mosquitoes. They were gigantic vampires, to be sure, but only six! My husband has seen more, but he tends to be outside in the evenings when it's cooler. I'm out in the mornings and early afternoons with my kids . . . and none of us have been bitten. That's a miracle.
Who knows? Maybe the lack of mosquitoes has nothing to do with the skeetervac. We had a weird transition into spring, and maybe all the mosquito eggs were decimated. Maybe there's some other environmental factor at work of which we're unaware. Maybe God is taking pity on me, knowing I couldn't handle the daily screeching that would ensue as I tried to spray down two-year-old twins before letting them outside. Whatever the reason, I am thankful beyond measure that we're not dealing with mosquitoes.
Now if someone could invent a yappervac to repel the neighbor's chihuahua and poodle that keep using our front yard as their own personal toilet . . .
Dinner last night: spaghetti and meatballs, broccoli
Posted by Kim

Email ThisBlogThis!Share to TwitterShare to FacebookShare to Pinterest
Labels: garden