Despite its relative isolation from the rest of the country, Alaska is remarkably rich in culture. There's the native culture, of course, but the natural beauty of the land seems to attract artists from every field. Some stay to live here, while others merely visit for inspiration.

If you are familiar with dance at all, you might be surprised at the luminaries in the dance world who have performed up here, such as Mikhail Baryshnikov (ballet and modern) and Gregory Hines (tap), as well as world-renowned dance companies, like Alvin Ailey American Dance Theatre. Living in Alaska, I think I may have experienced more topnotch performances than a lot of people who live in New York or Los Angeles. I'll never forget the evening I attended a performance in Fairbanks, Alaska, of all places, by Martha Graham's Dance Company; the dancers were amazing and the choreography stunning. At the conclusion of the show, as the dancers took their bows, out walked the legendary Martha Graham herself! She had to have been in her early 90s, but she was straight-backed and beautiful, wearing her hair in her trademark chignon. To think that she was still traveling with her dancers, even to the top of the world, blew my mind.

I've sat in small theaters, watching up close and personal as comedian Bill Cosby or mime Marcel Marceau or singer Suzanne Vega performed. Huge acts like Justin Bieber would probably never bring their shows up here—we don't have venues large enough to hold the pyrotechnics and 6,000 screaming teenagers—but Elton John has played in Alaska. He just needed a stage and piano. Traveling Broadway musicals make it to Anchorage several times a year; last fall, we were enthralled by Lion King, and this season, productions of Fiddler on the Roof, Beauty and the Beast, and Rock of Ages will play in our big city. I'm not talking about community theatre, either—these shows are the real deal, with professional casts and orchestra and the Broadway sets and costumes.

This past weekend, k.d. lang played two shows with her 5-piece band, Siss Boom Bang. I was a tad hesitant to attend her concert, mostly because I know that she is quite outspoken about her various causes and I did not want to be trapped at a political rally. As she stepped onto the stage, she said that she and her musicians were there "to give you our best." She was not kidding. The musicians in her band are fantastic. Her vocal ability is AMAZING. About halfway through the set, she sang a rendition of Hallelujah that brought tears to my eyes and the crowd to their feet. STANDING OVATION. In the middle of the concert. She was that good. And she never once brought up her politics or vegan eating habits . . . it was all music, all night. 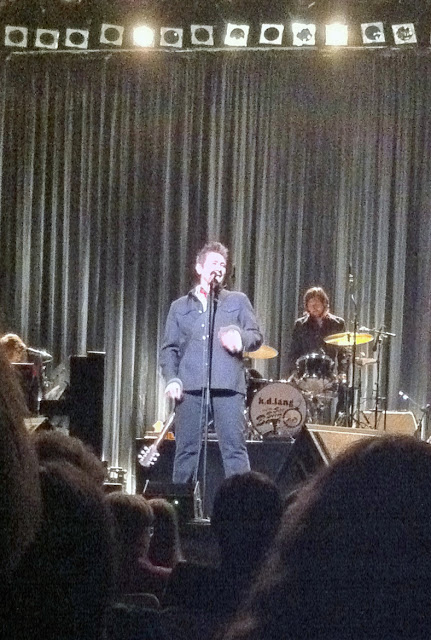 I know, I know. Photography is not allowed. Can I help it if I was trying to turn off my cellphone and it accidentally snapped a picture?


Exactly three years ago:
Things to Do with Your Kids This Weekend 20

I would love to see k.d. Lang live! I adore music too and used to be much more involved. It's great to live in a place with access to good performances.

Oh wow, glad she gave such a great show without getting all political!

It's good to know that Alaska doesn't get left out of all the tours. Even if it does, inexplicably, cost extra to ship stuff there.