Last night I passed by the living room window just as a strange cat was skulking around the corner of the house. I watched as the grey feline headed straight to our deck and squeezed under! Oh, no, she di'int. I called to my husband, "A cat I've never seen before just went under the deck." For some reason that announcement got him right out of the easy chair; he slapped his leg for Daisy and they headed outside to chase that cat away.

Did I say chase that cat away? I meant to say, bark like a maniac for at least 45 minutes. You see, Daisy followed her nose right after that cat and got stuck under the deck. STUCK. We tried yelling. We tried cooing. We tried doggie treats. We tried the hose. Nothing could get that beagle out, and, in fact, I think she had squeezed herself into such a tight spot that she literally couldn't turn around and then could not figure how to back out. Finally, my husband had to get his drill and unscrew a plank so Daisy could crawl to freedom.

My 9-year-old was crying in relief, and immediately welcomed the filthy mud-covered dog into the house. Noooooo! We spent the next 5 minutes chasing her through the kitchen, the dining room, and the family room, where we were able to grab her and drag her to the bathroom for a shampoo and rinse. Then I sent everyone to bed, mopped up the muddy paw prints, and fell into bed myself.

The strange gray cat is still hiding under the deck. 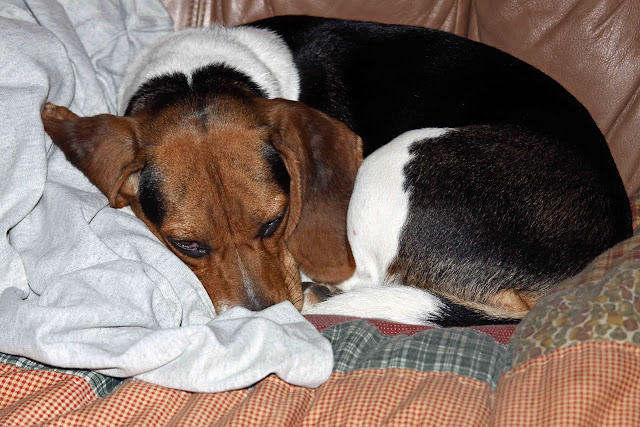 
Exactly one year ago:
Old Lady in the Snow
Posted by Kim

Sounds to me you encountered one of my family's infamous "five minute jobs". When something you figure should be quick and easy turns out to be long, laborious and frustrating.

Thanks for the giggles. I imagine the scene around there was pretty hectic and perhaps equivilant to a cartoon episode? Hee hee hee! Ahem. Not laughing!!

Oh...your dog is very darling, and I love beagles, but stories like this are why my husband refuses to get a dog. We also have a cat that comes around that doesn't not belong to us. I've tried to shoo it away without success. Although I wish I had tried a little harder, because that stupid cat caught and ate the chipmunk that lived by our back door. :(

Poor Daisy! That was a stressful and humiliating experience for her. I think she needs and extra treat! (See why my dog's so bad?)

She looks like she knows she goofed. But I agree with AngieB... she needs some treats! (Which explains why my cats think every time I go to the kitchen I'm going in there to feed them!)

Awww, she looks completely defeated in that picture. Just imagine how humiliated she feels...LOL!!!

My kids let in some random cat the other day. It looked just like our cat, oddly enough, but as soon as it meowed, Bella said, "That doesn't sound like Ivy". Sure as heck, it wasn't. The cat was all too happy to leave our home, especially after he realized he was surrounded by kids who looked all too eager to pick him up.

Let us know when the new additions to your family arrive. ;o)

We had a stray cat that lived under our deck. It was fine until my mom realized that she hadn't been spayed and she started receiving visitors. It was like a kitty brothel in the backyard.

I know this wasn't funny in the least to you, but it will be, in about 10 years, right?