My husband threw me for a loop when he announced last week that he wanted a real tree this year. I guess he's finally recovered from our first Christmas together as a married couple.
We lived in a tiny apartment on the University of Alaska campus in Fairbanks. There are many wonderful things I could say about Fairbanks, Alaska, but for the purposes of this post, you just need to click on over to today's temperature in that part of our state. So, on a bright, chilly December day in Fairbanks, my brand new husband and I drove out into the Alaskan hills somewhere and cut down a little tree that looked cute outdoors but appeared decidedly frightful standing inside our shoebox of a home. The very next day, our Christmas tree dropped all of its needles and we were left with a naked, brown monstrosity adorned with a strand of lights and a few ornaments. Being the stubborn, broke newlyweds that we were, we let that Charlie Brown tree stand in all its glory until Christmas morning.
I have no idea if I snapped a photograph—I hope I did and that some day I'll come across it so that I can prove how pitiful it looked—but if I didn't capture that joyous piece of Christmas cheer on film, the vivid picture in my and my husband's minds will last a lifetime. In fact, when we reach our late 90s and are in the midst of full-blown dementia, that "real, live" Christmas tree will be our one remaining memory we will describe over and over to the coat stand in the corner that we mistake for a nurse's aide.
We bought fresh trees for a few years after that, but at some point in the early 1990s, after our cat climbed up into one and knocked it over, sending needles flying throughout the room that I was still vacuuming up the following February, we gave up trying to fill the air with the scent of fresh pine and purchased an artificial evergreen. It's served us well over the years as each of our four little girls has made her entrance into our family. They've been able to crawl around the living room floor and touch the tree without impaling themselves. Dragging out the box and putting all the pieces of our tree together has become as much a tradition for our family as skiing out into the forest to cut down the perfect tree has become a tradition for the classy families of the world. 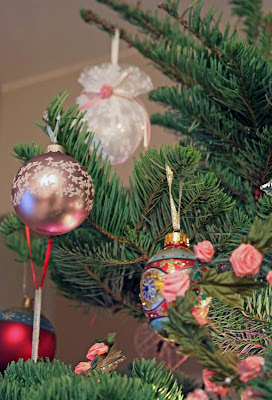 Only 18 days left until Christmas . . .
get that tree up and decorated!
Dinner last night: stuffed pasta shells, green peas
Posted by Kim

Email ThisBlogThis!Share to TwitterShare to FacebookShare to Pinterest
Labels: Christmas

Love those little rosebuds! Looks like a Victorian Christmas tree.

That first Christmas tree story is truly pitiful. We have a "Charlie brown Christmas Tree" story too, but yours wins.

I am so tired of vacuuming up razor-sharp evergreen needles, but my husband will be in the ground before I'm allowed to put up an artificial tree.

I think I like the idea of having a real tree more than anything. It's annoying to vacuum needles for months and having to remember to water it and being afraid to leave the lights on too long for fear it might catch fire.

But there's not a candle in the world that can fully capture that fresh evergreen scent.

Both of my kids are allergic to pine so it's fake trees all around at our house! Currently we have 7! lol! We are just crazy!(love those tiny rosebuds!)

HA!! Coatstand in the corner. You kill me. :)
Pretty ornaments, btw. I'm still a die-hard tree-in-the-woods hunter, but I can see the pull, for sure. What a mess it can be.