Back to School Blues

Today is the first day of school. Is it just me, or is August 18 early? I'm feeling bereft this morning, and a little out of sorts. This day caught me by surprise—no, not by surprise because obviously I knew it was coming, but maybe off guard or unaware.

The first huge red flag was waved at me yesterday, when the school nurse called to say my daughters would not be allowed to attend school unless they had their chicken pox vaccinations. My oldest daughter has received one varicella shot, but evidently needs a second, and my 9-year-old has had none, although I swear I went through a frantic visit to the doctor to prepare her for preschool, but chicken pox never got marked down on her shot record. So yesterday afternoon, right when my 3-year-old twins should have been going down for their naps, we all piled into the minivan and headed to the health clinic where free vaccinations are offered to Alaskan children.

Let me just say that if my experience at the Department of Health Services is any indication whatsoever of what Obamacare will be like, then mine will be the next face you see on your television when ABC news reports on "angry mobs" and "town hall meetings." Because, people, that was an afternoon I don't ever want to experience again.

It was government bureaucracy at its most stereotypical: old building, cramped waiting room, long line waiting to check in at the computer, then waiting over two freakin' hours to check in with a human sitting at her computer—a woman who will soon be promoted to a position at the DMV if her dead eyes and uncaring attitude have anything to do with it— followed by another long wait to see a nurse.

In summary, the day was horrible but at least the girls got their shots. We didn't arrive back home until almost 5:00 and I rushed to get dinner on the table. Then, because her left arm is broken and in a cast, I had to help my 9-year-old take a bath and wash her hair, which led to the twins jumping in the tub and my having to give them both a bath. By the time everyone was powdered and pajama-ed, I was too exhausted to run to the store to buy my girls the school supplies they needed but that I hadn't yet purchased because this day snuck up on me and I wasn't ready.

So my girls are attending school with band-aids on their deltoids but without new gym shoes or zippered pencil pouches. 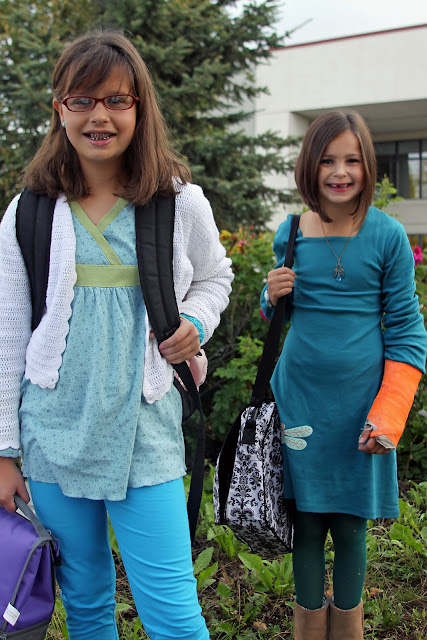 This was an upsetting post on many levels. And yes, August 18 IS a tad early. Is there some sort of weather-related reason that you need to get a jump on the school year? My oldest is starting college on August 27th, and I think our local school starts on August 31.

The chicken poxs vaccinations are mandatory?? Here it's our choice whether to get them done.

Yikes! It sounds like I'm "comparing" in a bad way. I don't mean too sound that way!!

Sorry about your day sneaking up on you... although it sounds more like it jumped up out of nowhere, rearing it's ugly head at you! I hope the rest of your week goes by nice and smooth! :)

I work for the state department of health here and I just want to say government can NOT be trusted with healthcare. It's not specific to this department, just government in general. Employees are not paid or even promoted based on how well they do so they get happiness from denying others. We'll all be so caught up in so much tape it'll be ridiculous if this ever goes through.

Cole and Bella started kindergarten today! It does seem really early, doesn't it? I think I didn't start school until after Labor day each year. Oh and we also didn't get a whole week of for Thanksgiving but now the kids have 1 week off.

Sorry you had to endure that agonizing wait at the health clinic. What a sucky way to start off the school year.