My friend, Kelly, knows what kids like. Years ago, she bought my eldest daughter a pogo stick, on which she jumped ad nauseum. When she grew too heavy for it, she passed it on to her younger sister, who has since become a carnival freak with her tricky pogo stick jumping.
Then Kelly gave both my older girls scooters, which taught my girls to share, because every kid on our street begged, pleaded, and offered up their stashes of candy to ride them. We've since moved out into the woods, so the girls are limited to toodling around on the driveway, but since the heights of the handle bars are easily adjusted, my 3-year-old twins are learning to ride the scooters.
Kelly did it again this past weekend with, of all things, balloons. Now these aren't your ordinary balloons. They're long, brightly colored tube-shaped balloons that shoot up into the sky like rockets when you release them. The kids absolutely loved them! 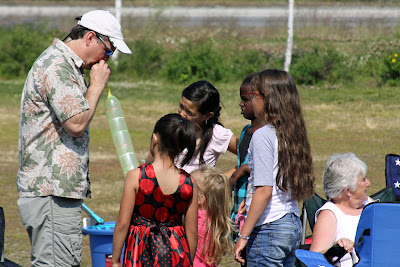 My husband quickly became the blower-upper, partly because of his lung capacity, but mostly because he's still a 13-year-old at heart. 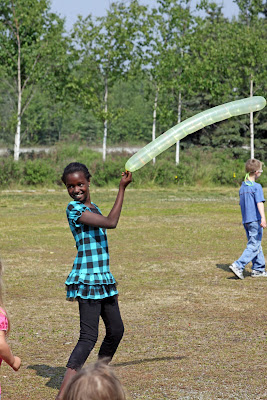 Anticipation is the best part. 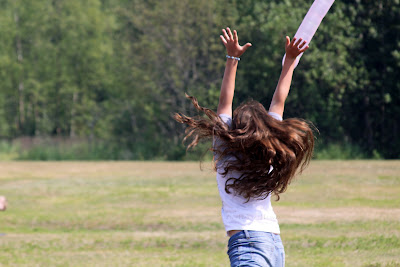 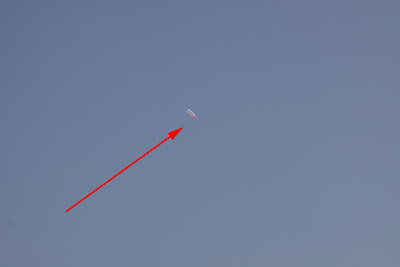 I realize that without trees or airplanes or even a cloud for context, this picture is useless . . . but let me assure you that this balloon flew soooo far up into the sky we could barely see it any more. Don't worry, though . . . after all its air went out, each deflated balloon would spiral and writhe down through the sky like a snake's shed skin, falling back to the ground where a happy kid would retrieve it and run it back over to my husband to start the process all over again.
Dinner last night: rice, sausages, and peas
Posted by Kim

That looks like so much fun! Balloons are always a hit with my kids too, esp water balloons. You seem to capture the best action shots with your camera. I absolutely love the one of your daughter with her arms outstretched towards the sky as she's releasing a balloon!

Hey, we want some too! I will have to shop around for some of those bad boys. Too FUN!

I don't know about my Emily, but I would LOVE those things! :o)