Seeing as my 8-year-old loves dolls, Christmas is approaching, and toys are on my mind, this news headline caught my eye. Personally, I don't much care for Bratz dolls. They're a little too cheeky, if you ask me. But I do like Barbie dolls—probably because I only ever possessed one Barbie that I had to share with my sister. We named her "Penny" and made a bed for her in our sock drawer. She came with only one dress, but we crocheted many scarves and little blankets for her. Penny was precious to us.
So I'm rooting for Barbie to kick Bratz's bootay.
It's not going to be easy with those tiny little feet of hers. Barbie may have seniority on her side—she's been around awhile and knows the score—but Bratz has freakishly large feet in sky high platform sandals that can be literally torn off and replaced with mutant go-go boots. That Bratz is one tough chick.
I hope that Barbie resists making fun of Bratz's eye shadow or pointing out the shortness of her skirts. Smear tactics have a way of backfiring. Little girls think neon purple eyelids are pretty, not garish, and who cares if the skirts are short? They're sparkly! Besides, Barbie's no angel herself. I seem to recall seeing her in some rather itsy bitsy teeny weeny yellow polka-dot bikinis of her own over the years. Not to mention the fact that, in our household, Barbie is often found lounging in the toy box completely naked. What's up with that? It's not like my daughter doesn't possess 50,000 articles of Barbie clothing with which to dress the little minx.
Don't mistake nudity for street cred. People see right through her attempts to impress . . . which is it, Lawyer Barbie or Disco Barbie? One minute she's Pediatrician Barbie, and the next she's Beach Barbie. She really expects us to overlook Teenage Barbie dating Ken just because she's got an alter ego named Teacher Barbie? Bratz, on the other hand, doesn't care what we think of her. She is what she is. Edgy. Hip. She's fun-loving and impudent, and doesn't give a rip what the old fogies say about her.
Sure, Barbie possesses the undying support of millions of middle-aged youthful and lively women who grew up with her. But Bratz is backed by screaming, allowance-clutching preteens who have been trained in the art of shopping through years of watching Hannah Montana and Cheetah Girls.
It's going to be one tough battle. 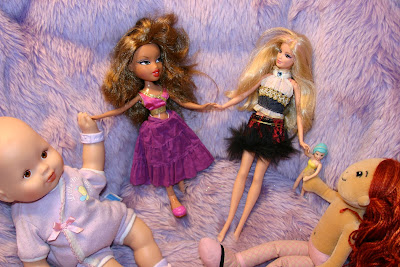 Can't we all be friends?
Dinner last night: pizza
Posted by Kim

This lawsuit is such a joke. Greedy, spoiled children. And how on earth do they plan to recall or confiscate all existing Bratz? Collectors around the globe will smell blood and horde them.

It wouldn't surprise me if this is a Mattel ploy to acquire the company while the product enjoys a fresh wave of popularity. And just in time for the holidays!

Remember when they "discontinued" Ty beanie babies and collectors went wild, only to have Ty introduce the next generation shortly thereafter?

My oldest daughter was on a Bratz kick about 7 years ago. Now the younger ones are obsessed. The toy box houses numerous Bratz amputees, and chunky feet can be found in corners on every floor of the house. Oh well, at least they're not choking hazards like Barbie shoes!

I had to laugh at your accompanying doll picture - we own every one of those! The bean bag baby dolls are coveted in this house and are frequently the objects of shrieking tugs-of-war.

Have a beautiful day!

Oh my gosh...I thought that was hilarious!

I grew up with Barbies, of course, and my girls are too young for that stuff so far. However, those Bratz are a little trampy in my opinion...but who knows, we will probably have whatever is popular at the time we hit that stage.

Hee hee! I hate Bratz. I spend all my time, day in and day out, 24-7 trying to make sure I am not RAISING any brats, so why do I want to bring home dolls that are? LOL. We like Barbie but American Girl has taken over and has no signs of leaving. Love it. History, cute dolls, cute clothes, and no shortage of bday and christmas gifts. Love me some American Girls.

My daughter turned 3 last week. Her dad took her shopping to let her pick out a toy. I am proud to say she picked out her very first Barbie! Yay for Barbie!!

I TOTALLY agree with what glitzen said! I LOVE AG dolls! I have three of them myself. Well, really 2 JLY dolls, and one Mia Bella doll by Madame Alexander. I started collecting on January 1st, 2007; I spent my Christmas money on getting my Mia Bella doll, the youngest of my 'girls', named Zoey. On Christmas, 2008, I got my first JLY doll, I forgot her number, but her name was Faith, my middle name. In the summer of 2009, I met my best friend, Sam, and later on, I inspired her to liking AG dolls, from all the stuff I had for my dolls. In the late fall of 2009, I got my third doll, another JLY, which I named Hannah. Faith is my oldest, being 12, like me, and Hannah is 11; Zoey just turned 10 in January. Anyways, I saved up all my money from christmas and...i think....halloween, and I got a JLY doll for Sam! Just in time for her 13th b-day in March! She was so phsyched when she opened it; the look was priceless! As was mine when I opened Faith, and when Hannah arrived in the mail. I will always love AG dolls! And I'm saving up for another JLY doll! I'm going to name her Savannah Carrie. How does that sound? Oh, and about the Barbie/Bratz issue, I vote for Bratz!