My daughter turns 10 years old later this month. We threw an early birthday party over the weekend, before school ends and all of my daughter's friends disappear into their summer vacation. The weather cooperated, so we were able to celebrate outdoors. I don't think I could have handled a bunch of slap-happy fourth graders running through my house. 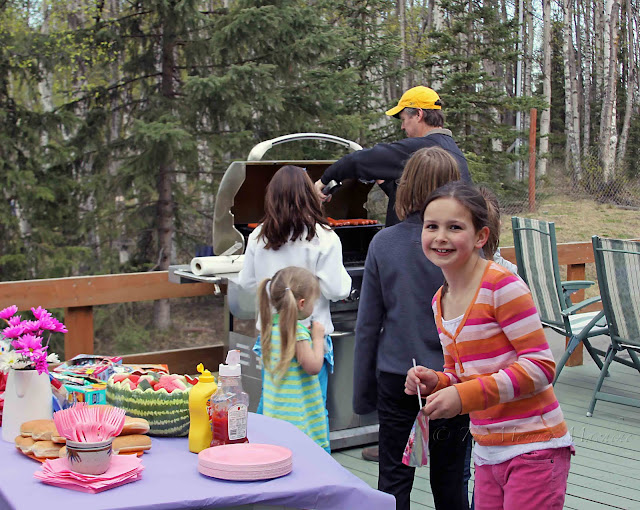 We kept the food simple:
hot dogs on the grill, watermelon, chips, and juice.
I organized a game, loosely based on The Amazing Race, and used different colored bandanas to divide the party guests into small groups. The teams each received a clue in a sealed envelope that required them to find additional hidden clues, which led to various challenges set up around our back yard (shoot 3 baskets, jump on the trampoline, correctly count a bunch of pennies, etc.) 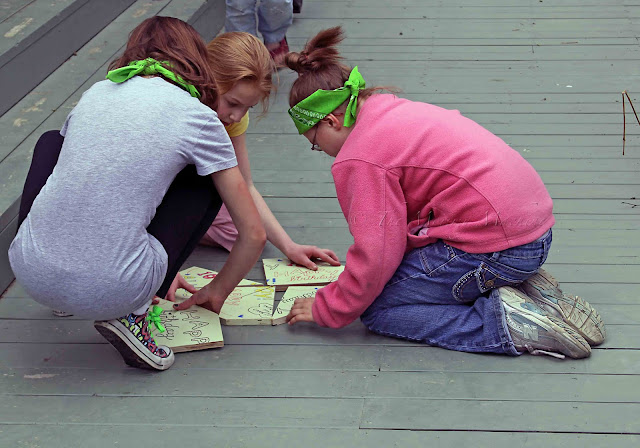 The game ended with each team racing to finish a final puzzle. The teams got to pick prizes from a basket based on the order they finished, so the first team to solve their puzzle got first dibs, but everyone still received something. 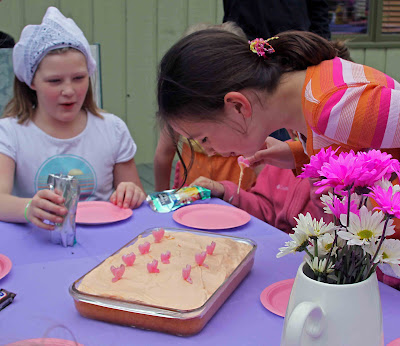 I normally make a fancy decorated theme cake for my children's birthday parties, but my daughter just wanted her favorite cake this year. Some of her guests were dubious about such a plain dessert, but after trying a bite, declared it "Really good!"
Three birthdays down, one to go . . .
Dinner last night: pizza
Posted by Kim

The party seemed like a lot of fun. I loved how you did the prizes for the game. Great idea.

What a cute party. I especially like the watermelon basket on the table. I'm going to have to try to make that cake sometime.

It sounds like a fun party. I like the Amazing Race game and the way you handled the prizes.

That sounds like such a GREAT idea for a party game!

And that cake looks yummy. Now I want cake.

All I want to know is how much you had to pay for a watermelon in May in Alaska? I live in Texas and these suckers are still seven bucks.

Looks like a great party, your girls have loads of fun over the coarse of the year dont they?!. My son is also 10 on the very last day of this month, he however is in year 5 and goes to secondary (high) school next september!!! and he is also a very small 10!.I wish we were in Alaska, you break for summer soon as well dont you? we have to wait until end of july!. I love your blog!.

Great party idea, love it. Will have to steal. LOL. My kids are all fall/winter bdays, so we do lots of sledding, etc. Summer bdays are the best!!!! Love your pics.