I spent an extended weekend in Homer, Alaska, attending the Kachemak Bay Writers' Conference. I've known forever about this annual conference (okay, not forever, maybe just a decade), but never had time in my schedule to participate. This year I finally made it a priority. 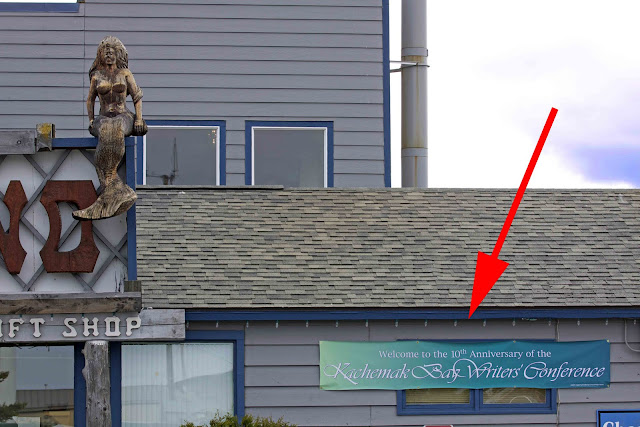 I don't know anything about writers' conferences, but from what I kept hearing from the presenters and attendees, this particular conference is pretty special. First, it's still going strong after 10 years, which evidently is unheard of for most writers' conferences. Second, it's set in one of the most spectacularly gorgeous spots on the earth: Kachemak Bay. I'll spare you a travel essay raving about the beaches, mountains, and ocean life; suffice it to say that you need to add VISIT KACHEMAK BAY to the top of your bucket list.

Third, the conference attracts Pulitzer-prize-winning and/or commercially successful and/or amazingly talented authors and poets. Past keynote speakers include such luminaries in the literary world as Tobias Wolff, Billy Collins, Amy Tan (author of Joy Luck Club—how sick am I that I didn't attend that year?), and Anne Lamott.

I was slightly intimidated by the many published writers attending the conference like they were mere mortals, was definitely inspired by the workshop leaders, and was a smidge depressed by the seemingly impossibility of anyone ever getting widely published again in this digital age of niche interests. A portion of the conference revolved around the business end of writing: editing, representation, publishing, distribution of one's work, etc. I mostly ignored those workshops and panels since I have no immediate plans to publish my riveting tales of twin toddlers cutting their hair, but I did converse with an interesting literary agent from New York City who sat at my dinner table one evening and the following day at lunch. I'm pretty sure he was trying to get me to sign with him. That's a joke. Not the sitting at my table, because HE DID. You would have been proud at how classy I behaved, never once clutching at his arm and screaming, Help me become the next JK Rowling!

My favorite presenter was probably Donna Jo Napoli. I was not familiar with her work, but looked forward to her talk on Historical Fiction with Respect to Children's Books. By the time the workshop ended I was in love with my new favorite author, and ended up buying a couple of her novels written for middle school readers. Did I mention she has authored over 70 books? Amazing.

Then there was the professor from the University of Alaska Fairbanks who led a great workshop with tons of useful information and strategies for dealing with omniscient narration. He reminded me of so many of my English professors at UAF; that is to say, he's very proud about the fact that he hasn't owned a television set since 1973. Also, he despises Dean Koontz. When I was in college, the contempt was directed at Stephen King. I understand where purists are coming from—literature should remain first and foremost an art form—but whatever. I love me my John Grisham novels.

Lest you think I'm all high and mighty with my liberal use of such terms as omniscient narration and luminaries in the literary world, I'll end this post with a description of my favorite moment from the conference. Over lunch—and it's important to note this incident occurred during the noon hour in a meeting room and not at 2 a.m. at Alice's Champagne Palace—an Open Mic was scheduled for writers who wished to read excerpts from their current works.

The final participant to step up to the podium described herself as a writer of "erotica science fiction." I'm fairly certain I know what science fiction is; however, having never read erotica, I mistakenly presumed it to be literature of a titillating nature. Heaving bosoms, throbbing loincloths, and such. Um, no. Turns out, erotica is merely a nice-sounding label for pornography. This woman started narrating the most graphic, er, love scene you can imagine. Actually, please don't. Just trust me that the reading was inappropriate.

I had to bite the inside of my cheek to keep from laughing, and successfully refrained from elbowing the person next to me. I mean, really, the situation was begging to be commented on by a loud-mouthed blogger who finds it hysterically surreal when the word "phallus" echoes over the sound system of a banquet room. And the kicker? The audience applauded appreciatively when the author finished her selection. We may not know the definition of erotica, but we Alaskans are polite.


Exactly one year ago:
Baby Fever

I think I would go to the conference just to see that view.

That sounds like SO much fun! Most of the people in my writing group are getting ready to go to New York for a national writers' conference later this month, but I can't yet justify dropping that kind of moo-lah. I'd love to find something reasonably close by. And after this post I will certainly skip any "open mic" gatherings - I would have DIED laughing!!

It sounds like it was really interesting!!!! How cool that you sat next to a literary agent!

I would've died laughing during that one particular reading. I wouldn't have been able to help myself.

Maybe that writer was inspired by the Katy Perry diddy, E.T. Word has it that Kayne West does a little rap about alien sex in it. Not that I would know .......

Beautiful. But then again, you're in Alaska, all the scenery is beautiful. I have a friend from Homer Alaska. That's all I know about Homer. The writers conference sounds really interesting. Thanks for sharing.

I want to get to a writing conference SO bad but I think they're out of the budget for this year. Drat.

But your open mic lady would have been worth the price of registration right there!